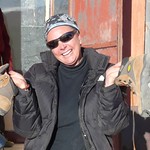 A self-confessed dromomaniac*, Kris Madden is a freelance travel writer with more than 60 countries (so far) under her belt. While studying zoology at La Trobe University in Melbourne, she realised that her future looked like she was going to spend her life staring down a microscope at animal poop; so she combined her love of wildlife and conservation, with her passion for writing and travelling to the world’s most far-flung places and completed a Masters in Communication at UTS.

A past president of the Australian Society of Travel Writers and member of the Foreign Correspondents Association, her articles now regularly appear in newspapers, magazines and online outlets around the world.

She is also a contributor to a number of books, including Lonely Planet’s ‘Code Green – Trips of a lifetime that won’t cost the Earth’; the National Geographic Adventure Atlas of Australia; and Insight Guides.

All posts by Kris Madden

* One with an uncontrollable impulse to wander or travel.